About Lord Shiva That Prove He Is The Mahadev :

Everybody knows that Shiva is ‘shakti’ or power. Shiva is the destroyer, the most powerful god of the Hindu pantheon and one of the godheads in the Hindu Trinity. Known by many names(godstatues) – Mahadeva, Mahayogi, Pashupati, Nataraja, Bhairava, Vishwanath, Bhava, Bhole Nath – Lord Shiva is perhaps the most complex of Hindu deities. Hindus recognize this by putting his shrine in the temple separate from those of other deities. 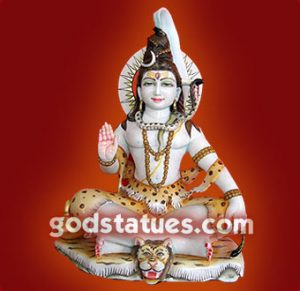 In Hinduism, the river Ganges is considered sacred and is personified as a goddess Gaṅgā. Some of Her other names include Jahanavi, Nikita, Sapteshwari, Urvijaya, Chitrani, Tridhara, Bhaagirathi, Shubhra, Vaishnavi, Vishnupadi, Bhagvatpadi, Tripathaga, Payoshnika, Mahabhadra, Mandakini, Meghal, Gangika, and Gangeshwari. She is worshiped by Hindus who believe that bathing in the river causes the remission of sins and facilitates Moksha (liberation from the cycle of life and death), and that the water of the Ganges is considered very pure. Pilgrims immerse the ashes of their kin in the Ganges, which is considered by them to bring the spirits closer to moksha. In Hinduism, moksha is the liberation from the cycle of life and death.

Ganga is described as the melodious, the fortunate, the cow that gives much milk, the eternally pure, the delightful, the body that is full of fish, affords delight to the eye and leaps over mountains in sport, the bedding that bestows water and happiness, and the friend or benefactor of all that lives.

Bhagiratha asked Brahma to bring the river Ganges down to earth so that he could perform a ceremony for his ancestors. Brahma asked Bhagiratha to propitiate Lord Shiva, for only Shiva could break Ganga’s landfall. Ganga arrogantly flew down to earth but Shiva calmly trapped her back in his hair and let her out in small streams. It is said, the touch of Shiva further sanctified Ganga.

Amarnath cave is a Hindu shrine located in Jammu and Kashmir, India. The cave is situated at an altitude of 3,888 m (12,756 ft), about 141 km (88 mi) from Srinagar, the summer capital of Jammu and Kashmir and reached through Pahalgam town. The shrine forms an important part of Hinduism,  and is considered to be one of the holiest shrines in Hinduism.  The cave is surrounded by snowy mountains. The cave itself is covered with snow most of the year except for a short period of time in summer when it is open for pilgrims. Thousands of Hindu devotees make an annual pilgrimage to the Amarnath cave on challenging mountainous terrain to see an ice stalagmite formed inside the cave.

It is believed, this is the cave where Shiva explained the secret of life and eternity to his divine consort, Parvati. Every year, followers and devotees of Lord Shiva pay their visit to the famous Amarnath cave. The cave also houses an ice stalagmite Lingam.

Shiva has a blue throat because he drank hole poison during

The Devas and Asuras started churning the milky ocean in order to obtain Amrit. In the process, they found a fatal poison – the Halahala poison, that had to be sucked out of the ocean. Without thinking of the consequences, Shiva drank all the poison and Parvati pressed his throat in order to stop the poison from spreading to other parts of his body – which is the reason behind his blue throat.

As the story goes, Surabhi, the mother of all cows started giving birth to a lot of cows, and the cows started flooding Kailash with their milk. Furious at this, Shiva used his third eye and destroyed many of them. To calm him down, the Gods sought to offer Nandi the magnificent bull to Lord Shiva(www.godstatues.com).

Often cited as an example of perfect marriage, Shiva along with his consort Parvati is represented in the Ardhanarishwar form – which is a half male and half female icon. It is believed that this androgynous form shows that the masculine energy (Purusha) and feminine energy (Prakrithi) of the universe in a synthesis.

Shiva’s Trishul or Trident the unity of three worlds

The Trident or Trishul of Lord Shiva unites the three worlds a human being is associated with – his inside world, the immediate world around him and the broader world. The trident shows a harmony between the three.

Sati, and not Parvati, (as most of us may not know), was the first wife of Shiva and was very fond of him. The daughter of a priest, her father did not approve of the ways of Shiva. When Sati’s father decided to perform a sacrifice, he invited everyone except for Shiva. This move to insult Shiva really bothered her and she killed herself in the sacrifice.

Hanuman, son of Anjana and Kesari

According to Hindu mythology Lord Shiva is the destroyer in the main three supreme God. There are three supreme gods 1st one is Lord Shiva, second one is Brahma and third one is Vishnu. Lord Shiva is a very complex God having many roles and powers. If we will talk of his destroyer role, Shiva often hunts cemeteries, wearing a headdress of snakes and a necklace of skulls. A band of terrifying demos, hungering for blood, accompanies him. Shiva can help human as well as Gods.