Son of Lord Shiva and Devi Parvati Ganesha is popularly worshipped under the names of Sumukha, Ekadanta, 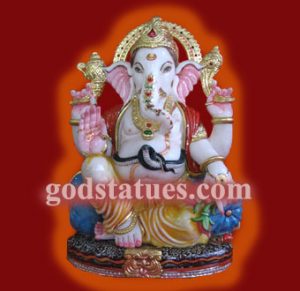 The Story of Lord Ganesha’s Birth.

We are all familiar with the story of how Ganesha became the elephant-headed God.
Parvati became dirty when she was celebrating with Shiva. When she realized this, she removed the dirt from her body and created a boy out of it. She then asked him to keep guard while she bathed.
When Shiva returned, the boy did not recognize him and obstructed his passage. So Shiva chopped off the boy’s head and entered.
Parvati was shocked when she saw this. She explained to Shiva that the boy was their son and pleaded with Shiva to save him at all costs.
Shiva then instructed his helpers to go and get the head of someone who was sleeping with their head pointing to the north. The helpers then got the head of an elephant, which Shiva affixed to the boy’s torso and Ganesha was born!

Why Lord Ganesha have an Elephant head ?

Elephants don’t walk around obstacles, neither are they stopped by them. They just remove them and walk ahead – signifying effortlessness. So, when we worship Lord Ganesha these qualities within us are kindled and we take on these qualities.

One day Ganesha and his younger brother Karthikeya were playing. They received a special fruit from the gods. Being kids, they were not ready to share the fruit.

Their parents, Lord Shiva and Parvati said that the first one, who comes around the world thrice, would get this fruit of immortality and supreme knowledge.

Karthikeya climbed on his peacock at once and set off, to win the fruit.

Ganesha was worried about winning the race as he had a stout appearance and his vehicle the Mouse does not have wings!

Later, he took a decision based on his wisdom and asked the permission of his parents to revolve around them thrice as he felt that his parents were his universe.

Ganesha won the race and the fruit.

When Lord Ganesha was born, Lord Shiva made a rule that Lord Ganesha must be worshiped first to ensure success in any endeavor.

However, Lord Shiva forgot about his own rule and left for a war with the demons in Tripura. He did not worship Lord Ganesha before doing so!

While he was on his way in his carriage, the wheel peg got damaged.

It was only then Lord Shiva remembered that he forgot to offer prayers to Lord Ganesh before departing for the war.

He offered his prayers to Ganesha and proceeded to the battle ground. Lord Shiva won the war!